Metatarsalgia is characterized by pain in the forefoot. The term literally means “pain on the metatarsal” (there are 5 metatarsal bones in the forefoot). Metatarsalgia is not a true diagnosis, but rather it is a symptom. Patients with metatarsalgia present with pain in their forefoot, usually in the ball of the foot (Figure 1). The pain is often described as aching, and it is typically aggravated by standing and walking. In general, metatarsalgia is caused by repetitive overloading of the forefoot, leading to chronic localized tissue injury. Often the most symptomatic area is at the base of the 2nd or 3rd toe. Factors that may predispose to the development of metatarsalgia include: a bunion deformity, arthritis of the great toe, ligament instability of the midfoot, an excessively tight calf muscle, a congenital foot deformity, and claw toe deformities.

Non-operative treatment of metatarsalgia is often successful. Treatment principles include: 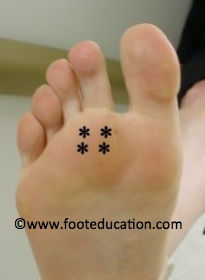 The pain that is experienced in metatarsalgia typically occurs in the ball of the foot (at the base of the second or third toes under the second or third metatarsal heads). It often feels like walking “on stones or pebbles” or on “a rolled up sock” in the front of the foot. The pain is often a deep ache and it is worse with walking on hard surfaces barefooted. There may also be a burning feeling extending into the tips of the second and third toes.

As the condition progresses, it may be associated with increased curling of the toes (clawtoes). This causes the padding of the forefoot to be pulled away and results in greater pressure beneath the bones of the foot. The result is a loss of protection from the metatarsal heads, less shock absorption with walking, callus formation, and more pain in the foot

Metatarsalgia can be confused with other “ball of foot conditions.” Many patients will have “clawtoes,” which is a curling of the little toes. Both conditions often occur and can be described by providers as the cause of the pain.

If an ink imprint of the weight bearing sole of the foot is obtained, such as with a Harris mat (a device that assesses how force is distributed throughout the foot), there is often an intense uptake in the area corresponding to the involved metatarsal head(s) (Figure 2).

Continued, localized, repetitive walking will predispose to chronic injury to the structures of the forefoot. The structures that are commonly injured include the MTP joint capsule, the plantar plate, and the metatarsal bone (head and/or neck). The irritation of the MTP joint is due to repetitive overload and can lead to swelling of the joint itself (Capsulitis or MTPJ Synovitis). The second and third toes may separate in metatarsalgia and patients will either have pain at the bottom and/or top of the ball of the foot (base of the toes).

X-rays in patients with metatarsalgia often demonstrate a long second or third metatarsal, relative to the first and the fourth metatarsal. In rare instances, the MTP joint may actually be partially or completely out of joint (subluxed or dislocated). Deformities of the 1st metatarsal, such as those present with a Bunion or with midfoot instability, may also be observed on x-ray.

Patients respond well to non-operative treatment. the goal of non-surgical treatment is to take weight off the painful area of the foot. This can be done with a combination of soft padded comfortable shoes, metatarsal pads, soft accommodative orthotics, activity modifications (avoid putting forced pressure to the ball of foot), calf stretching, foot muscle strengthening (try and gently curl toes), and NSAIDS (Non-steroidal anti-inflammatory drugs). 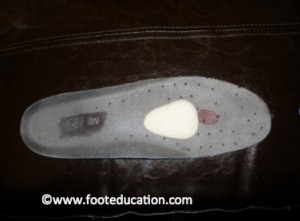 In a small percentage of patients surgery is needed for metatarsalgia. There are a variety of procedures that have been proposed, either in isolation or in combination to address Metatarsalgia. These include shortening the bones of the foot (corrective osteotomy), releasing the calf muscle (correcting the equinus contracture) and/or correcting the clawtoe deformity. It is essential that the primary cause of the metatarsalgia be addressed. The technique chosen will depend on the extent of the deformity, the stiffness of the toe, and the preference of the surgeon.

If the joint at the base of the involved toe (MTP joint) is swollen and inflamed it may be helpful to remove the inflamed synovial lining (synovectomy). This is often done in conjunction with other procedures. If the second and/or third metatarsal heads are “long,” they may be shortened to equal the weight through the ball of the foot.

If a Bunion deformity is present, this may need to be corrected in order to address the abnormal weight bearing of the forefoot. If a tight calf muscle is present and does not resolve with stretching, lengthening of the gastrocnemius muscle (Strayer procedure) may be beneficial.

The usual list of general post-surgical complications may occur with various procedures that are used to address metatarsalgia. This includes the potential for:

Surgery on the toes and forefoot is not as predictable or as easy as patients think. Specific complications depend on the procedure(s) that are performed but can include:

You have been invited to join our newsletter for weekly updates!.

Added to your cart: